Albacore tuna is the only tuna that can be canned under the “white meat” label. Its range is worldwide in temperate waters between 12ºC and 19ºC. The U.S. troll/pole fleet catch albacore in the colder waters that have higher Omega-3 oil content than the albacore caught by foreign longline fleets in the more tropical waters. 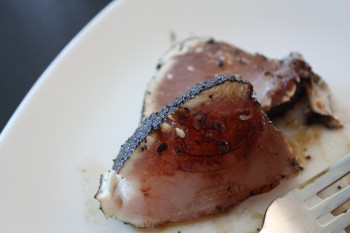 Albacore caught by longline methods that are 5-7 years old and canned by major canners can be distinguished on the label as having 1g of fat per serving, while troll/pole and line caught albacore that is 3-5 years old is labeled at 4g of fat or higher. (NOTE: It is ironic that people purchase the lower-fat tuna and then take it home and add numerous grams of fat with the addition of mayonnaise.)

The following publications and sites are good sources of reference for food security and supply worldwide:

MERCURY IN ALBACORE: The Good News and Bad News about Mercury and Consumption.

The Good News and Bad News about Mercury and Consumption.

The FDA of the U.S. is proposing changes to fish consumption guidelines especially regarding women who are pregnant. They will begin encouraging fish consumption of at least 8 -12 oz per week of seafood in general, to increase the intake of protein, omega 3 fatty acids, and nutrients found in seafood products. This is good news as many get scared off by sensationalist stories in the media and do not eat seafood. By avoiding seafood consumers may unfortunately replace it with fewer nutritious choices with no reliable information on the subject. Unfortunately the guidelines given on albacore tuna recommending 6 oz and less per week are skewed and do not take into consideration of the nature of the fishery especially here on the west coast where albacore caught are younger then the predominately canned albacore which is higher in mercury. U.S. west coast albacore is very low in testing done over the past 10 years. The Canadian government has recognized that fact in their recommendations.

The fact is that albacore is generally caught in two methods worldwide. Longlining for albacore occurs in the more tropical water and probably accounts for about 70% of the worldwide catch. Troll/Pole and Line accounts for the remainder and occurs in the subtropical zones of the U.S. west coast, Japan, New Zealand, South Africa, and the Bay of Biscay in Europe. Foreign longline caught albacore targets the larger 5-7 year-old fish and almost all of this is canned by major canners overseas and a large percentage is consumed in the U.S. under major brand names. It is generally labeled as 1 gram of fat or less. Troll/Pole and Line fisheries catch 3-5 year-old albacore which is higher in fat and omega-3’s and if you find it in a can the fat content will be generally 4 grams or more.

Longline caught albacore has tested higher in mercury but still far below FDA standards. Given it is the major consumer marketed albacore in the U.S. longline caught albacore is not separated from troll/pole which the mercury levels are far below the larger fish in retail stores, nor by the FDA, or in media stories.  This leaves the U.S. hook and line fishermen on the west coast fishing a very healthful tuna in a very sustainable method, in a situation of being lumped in with higher mercury albacore. Also, studies have also been conducted over the past eight years by the University of North Dakota – Dr. Nick Ralston showing the presence of selenium in fish such as albacore tuna mitigate any harmful effects of mercury.

Therefore, we are pleased with FDA’s attempt to encourage more seafood consumption but they also need to know that one size has never fit all when it comes to albacore. The Monterey Bay Aquarium has made this distinction in its Green, Yellow, Red lists and it is time for the FDA to recognize a 30,000,000 pound annual fishery the US has and its health benefits.

More articles and information on mercury:

SELENIUM AS A MITIGATING FACTOR:  The reason that high doses of methylmercury can cause harm in the body appears to be because mercury interferes with normal metabolic activities of selenium, an essential dietary nutrient. Supplementation with additional selenium has long been known to protect the body from adverse effects of mercury exposure. It now appears that this occurs because the additional selenium replaces the selenium that becomes unusable because of mercury binding. In addition, the considerable selenium content in albacore is beneficial; selenium binds to mercury, decreasing or eliminating its negative effects on the system.

Please Check Back for Updates on These Issues: 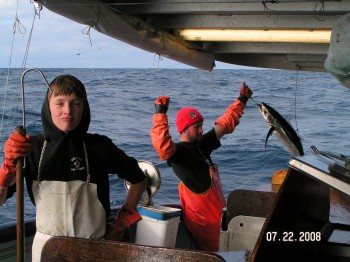 In the 1960s and '70s, the harbors along the West Coast were thriving communities of small-boat fishermen — nearly three times the current number — fishing for albacore tuna. The abundance of albacore hasn't diminished; in fact, numbers are now near the long-term abundance level. The Pacific Albacore fishery is not subject to overfishing, but every year fewer and fewer vessels are able to financially participate in the fishery.

Prices have stagnated and fishermen's costs are increasing; and there are fewer opportunities to fish other traditional fisheries because of privatization of formerly open access fisheries and the decline of salmon — another mainstay of the traditional West Coast hook-and-line fleet. Why has this happened, and what can be done to re-establish these traditional family-based fisheries? [Read more]